Joe here, Amanda has said I blog today or no dinner so here I am.

It has been a very tough month around the Clark household, as I know she has told you.  I had my 5th round of chemo since the surgery and to describe it as intense doesn’t even seem harsh enough.   By far, the worst experience I’ve had yet.  I was constantly throwing up and the nausea just wouldn’t go away.  I am now 138lbs, and it hurts for me to look in the mirror.  I can count my ribs pretty easily, and my eyes were once so sunken, I look like a dead man walking.

Having said that, we made it through.

Very slowly, my energy is coming back.  There are a lot of people who help motivate me.  Of course, Amanda takes on the brunt of it all.  My mom is around and friends and family are always stopping by to help us around the house.  YOU are all so important in this. We don’t feel alone. So, I wanted to share this story with you.

It’s about a young boy who was pretty good at sports.  At least, he thought he had some real talent.  His favorite sport, and the one closest to his heart, was baseball.

Growing up, he was always on All-star teams.  By 13 years old, he was playing on traveling baseball teams and lived for the summer heat playing nearly 100 games in a few short months.

When High School came around, he was bumped up to Varsity as a Sophomore.  He thought he’d really made it. He had 3 years to showcase his talent, and his dream was to lead the team to a State Championship.  He wanted to make it as an All-Conference player.  The ultimate title in the young man’s mind.

Years of hard work and his senior year came and went.  He lost in Sectionals and he was not named to the All-Conference team.  But he watched as 6 of his closest friends took the title he longed for.

Needless to say, this story is about me.  It was one of the most devastating moments of my young life that I still remember the sting. In fact, there was a hole in my bedroom door from a young athlete’s fist as I took my rage out as my parents listened in horror downstairs.

I knew I didn’t perform well enough that year.  I just couldn’t get out of my hitting slump.  This has always been an asterisk for me in my life.  It was an accomplishment that I tried so hard for.

I went on to play baseball for one year in college, until I realized how much I enjoyed college. Just like that,  my baseball career was over.

Or so I thought, until a few weeks ago. A package from my old coaches right on my front door step.

As I opened it, I was shocked to see  my old jersey inside.   You know, the one they make you give back at the end of the year? A group of young baseball players who are now living their dream on the diamonds have been following our story and sent a baseball #joestrong on it, signed by the entire Varsity team.

Tears began pouring down my face as I continued to look through the box.  There were letters in there from some of the current players.  I still can hardly believe they were writing about me.   To hear that you have made such an impact on people that you don’t even know is a surreal sensation.

These are kids walking down the same path I once walked. Living the dream I still somehow long for.

Some people don’t like sports, or understand them.  But, there is an unbreakable bond that lies within the confines of a locker room.  These are your brothers through thick and thin.  During the losing streaks and the walk-off home runs.  When you have to sacrifice yourself and your own play for your teammate.  And those relationships carry on when you are off the field as well.  My closest friends are the ones I grew up with enjoying the many successes of winning, and lifting each other up in defeat.

It kills me to say, I can’t even throw a baseball now.  The surgeries have taken that away from me.  So to see my life wrapped up in this box was an amazing gift for me.

And would you believe it? That team I didn’t make? Well, here I am at 30 years old and it looks like I made the team after all. It felt good to be, even for a day, named All-Conference.  Thanks for doing that guys.  You keep me going… 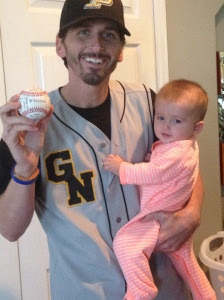